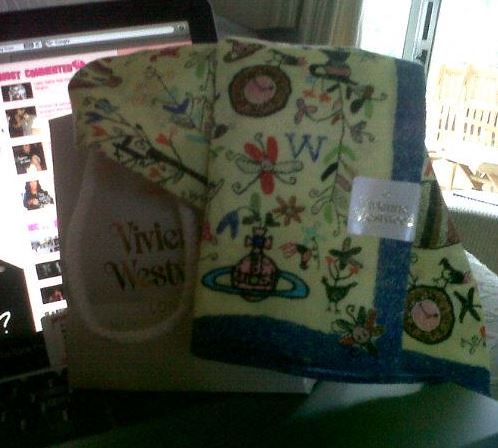 September 2012 marked the month where a small, perfect pink bag appeared in my lap. Said bag was from Vivienne Westwood, I kid you not. My Mum and Dad had bought me something beautiful, unique and fabulous, one of Vivienne’s simple handkerchiefs’ in one of her iconic designs.

This handkerchief quite literally became my right hand handkerchief for a year.  Taking its position on my right crutch I travelled with this handkerchief (even with its sticker still on wherever I went). It learnt the quick limp through the dodgy areas in poplar, Deptford and homerton, London, it came to physio, heavens towards the end it came to a now defunct club in Maidstone, where it caught the eye of the lady hand stamping us to come in.

“I love your scarf!” of course you would, its Westwood.

All in all we had a fantastic run, a year together, but it should have been a lifetime.

Moving to Kent later in the year I packed my prized possession into a blue box. A box I haven’t been able to get rid of since, just in case the scarf is still hiding in the corner but as you now know the scarf went missing. Between Hertfordshire and Kent, a Kent flat to another it disappeared.

I thought honestly, my luck couldn’t get any worse, I lost one scarf, I couldn’t lose a second right? Well that just proves me a fool.

Fast forward to October 2016 and myself and Josh got married, we went to Berlin the day after. Stalked the streets, tagged onto tours and trawled the city of all of its museums. My outfit on repeat was a button up cord skirt, a black lightweight sweater from Zara and a neck scarf.

Vintage, pulled from Beyond Retro in Brick lane, Summer 2012, I’d never felt the need to wear it before. I had always failed to work out a way to wear it when it was slightly too short. In Berlin however, I realised I could wear it many ways. Tied around my neck like a cowgirl, around my wrist, the belt loops in my skirt, I swear it made it back on the plane…

Now I’m not so sure.

Much like the beloved Vivienne Westwood, it seems the silk scarf doesn’t want to stay friends with me for long. I’m becoming a prolific scarf loser. Worst still when they disappear they seem to do so silently, slipping away in the night like a temporary lover. Am I going to spend my life leaving my favourite scarves all over the globe?

I pray to anyone listening that the Vivienne and the vintage number have found their ways into nice loving homes, not chucked out as trash. Maybe Vivienne is now tied to some other girl’s crutch or handbag, the vintage, some stylish ladies neck, or maybe they have made entirely new lives….

In terms of me searching for them both, I haven’t stopped. I keep that blue box in the hopes that it might just offer my scarf back up four years later. I check bags randomly as I have a flash of genius, maybe I left it here…. The sadness is I never have, we moved house again and Vivienne never re surfaced, she was gone. Now I do the same on the vintage, waiting for its eventual return where I might slap myself on the forehead good naturedly, well of course! Here you are!