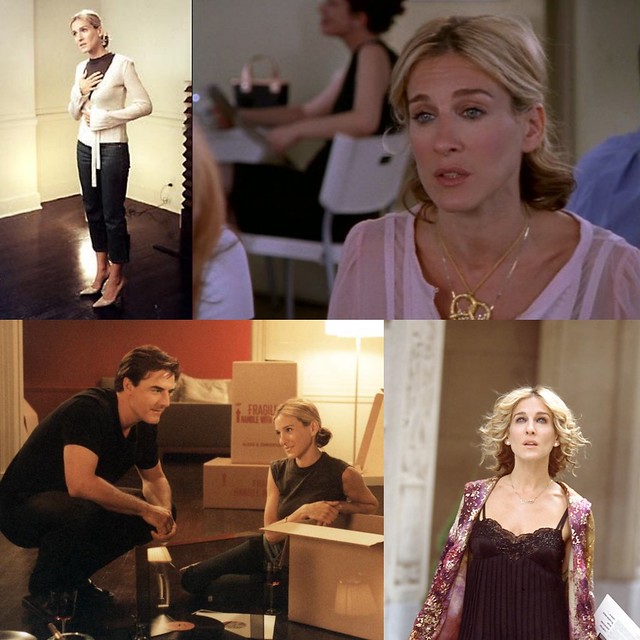 In the final episode of Sex and the City’s season four, “I heart NY”, Carrie is wearing a gold, pretzel necklace. Could this look come back, is it back and are we just embarking on an infinite fashion loop?

Re-watching Sex and the City, (the TV series), is an odd show to watch almost twenty years later. Why? Quite simply it may have just stopped aging. Or at least the fourth season has.

Watch the first season perhaps and you’ll see clothes so dated you can understand its no longer 2017, but in season four? The last episode in particular, Carrie is wearing cropped, flared jeans in a mid rise and later a pretzel shaped necklace in gold. My first thought of course was, I have that exact same pendant! The only difference is mine is a bottle opener from Anthropologie, that being said it didn’t stop me considering hanging it on gold thread.

Then I paid attention to the pale pink chiffon top. It has a frilled bottom edge and two horizontal slits up the side, quite frankly its Zara right now and I can’t decide whether fashion has just gone full circle or whether Patricia Field’s vision has just only now become mainstream.

It’s an interesting phenomenon to see how all these things have changed and at the same time not. Fashion has cycled back around to whimsy, to fun, to finding a look through pieces that for once focus on details rather than just simple, clean lines.

Perhaps it is also proof that real, honest style is timeless. Its not necessarily bought from the pages of Vogue but rather our own imaginations of dressing to play a character. If I learnt anything from a Saturday afternoon watching reruns it is this, whenever you purchase something look outside the box, go whimsy, go personal and look for details, because just like the girls timeless stories, details never truly go out of style.

Or at the very least, they might just come back around.