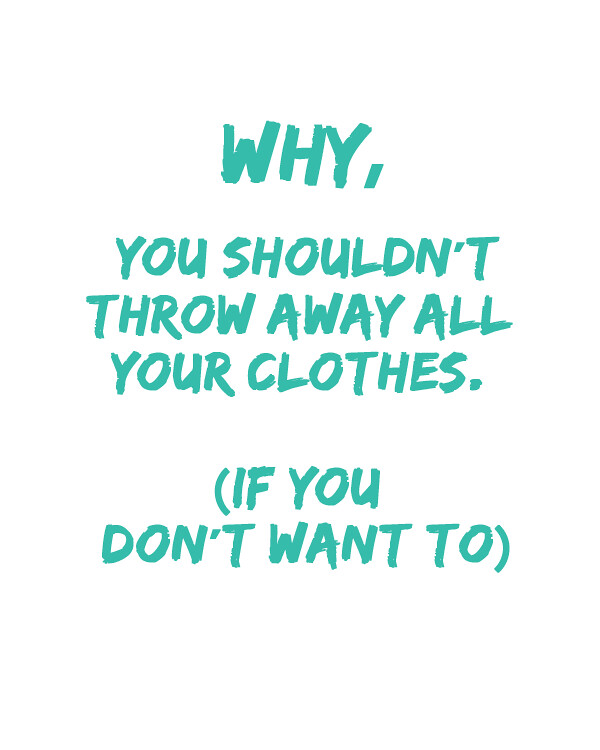 Why you shouldn’t throw away all your clothes.

When I met up with my mum the other day she appeared horrified that I was maybe just ‘throwing away clothes’. If I were to name the two most worrying parts of any capsule or minimalist living challenge it’s firstly, I can’t shop? And secondly I have to throw away years of shopping?

What I think us real girls need to consider when undertaking this mind-set is,

“You shouldn’t have to throw away all your clothes. (If you don’t want to)”

If you want to follow a minimalist lifestyle you may be wondering why you shouldn’t. After all, to have less, you need to have less right? I think that’s where these ‘challenges’ go wrong. Part of what draws me to a minimalist lifestyle is two things. Firstly when I was a university student and had less stuff at my fingertips did I ever feel deprived with less? Quite simply, no I didn’t in fact I felt a lot more relieved with less things cluttering much needed space and it was an easier way to live.

Secondly, when myself and Josh visited India last year we were so struck by the people and their approach to life that it really made us reflect on our lives here in the UK and the over emphasis on stuff that had overcome us. In Ahmedabad for example, there is this crazy mix of shanty towns and even families living on the street right next to these posh, high rise buildings. This stark comparison really rocked the both of us because regardless of their living or financial situations they are such happy, inquisitive and lovely people that it made us really question what we had been valuing in our lives.

It’s this second reason for me that is why I really want to tell you, don’t just throw away your clothes, instead, curate your life and move forward with a new mind-set.

My right now plan is very different to my future down the line plan. To start, I am donating anything that doesn’t fit or look right, whether that’s just that never worn dress to my sister in law or to causes that give clothes to the homeless and third world countries. But I am keeping the clothes I love and wear every day.

I fell into the trap during my later university days of buying new clothes because you were going out and felt like you shouldn’t be seen in the same thing twice. Remixing had no place in my life and that’s something that I am really looking to rectify. Maybe after the first year or two I will be able to halve my overall amount but I am not rushing to only have 33 items in full right now because for me that is unrealistic.

I also want to address purging. Everything that has been thrown has been donated in some form, nothing has just been thrown in the bin, its all going to a cause or a friend or a family member! Then in regards to keeping things, I have only kept the items that I feel unable to part with whether thats because it is not in keeping with the current season or maybe even its having an emotional connection that stops me chucking an item. Therefore I am not throwing away anything that I don’t still feel I have a use for even if it means having a larger wardrobe overall.

A fantastic blogger with a similar story is Sara from “Our Small Space” who after a year of working the capsule wardrobe still has more than 33 pieces overall. Read her thoughts on her journey so far here+.